by Cathy Day
On Thursday, I took a break from thinking about my big thing to write a small thing.
Huffington Post‘s “Seven Rings: A Game of Artists’ Telephone” is a new media blog/art project curated by poet Nicole Walker and artist Rebecca Campbell. “Seven Rings” works like this: someone writes a poem, sends that poem to a visual artist, who has one day to respond with a work of visual art, which is then forwarded to a writer who has one day to respond with a poem, story, or essay, which is forwarded to another visual artist who responds in one day with painting or drawing or photograph-and so on.
I signed on for this in June, and I’ve been nervously anticipating it ever since. What would they send me? Would I be inspired enough to write something? And would the story be good enough to publish?
I knew the art would be sent to me Thursday, Oct. 28 at noon Pacific time. So I cleared my schedule for Thursday night and Friday morning. Right on time, Nicole Walker sent me this picture: 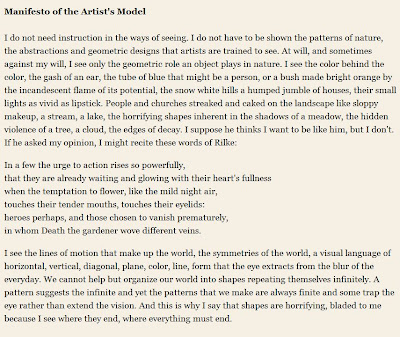 Which was a response to Adam Bateman’s art:

The conversation seemed to have taken a meta-turn about the nature of art, about representation itself. I was reminded of what James Woods said in How Fiction Works: “Since Plato and Aristotle, fictional and dramatic narrative has provoked two large recurring discussions: one is centered on the question of mimesis and the real (what should fiction represent?) and the other on the question of sympathy and how fictional narrative exercises it.” At first, I thought I should push myself to write the literary equivalent of the Adam Bateman painting, a story that resists the real, resists narrative.
Sometimes it’s only when we are presented with art that challenges our assumptions that we recognize that we even have assumptions. Why does there need to be, as Mario Varga Llosa said, a “trampoline of reality” from which you create a fabrication? Why can’t a white plate be a canvas? Why can’t food be sculpture? Hmmm…paradigm shifts. I sat there for awhile trying to figure out how to speak to paradigm shifts. Maybe I should write a prose poem or lyric essay and focus less on narrative and more on language.
And then I realized, Wow, time is really flying by. So I did what comes naturally. I wrote a story. For whatever reason, I can’t resist narrative. I. Just. Can’t.
So I wrote about the gender paradigm (a VERY big thing), something that’s been on my mind a lot lately:
Do women writers need “wives”?
Why are some men ashamed of performing household duties? Why are some women ashamed of performing household duties? Why do so many couples maintain dual careers, double incomes, double the stress, rather than opting to live more simply on a single income? And why is it usually the man who works and the woman who stays home? Why does the opposite arrangement freak people out? What is a wife in the 21st century? How do couples who both feel they each have important work to do (a relationship in which there is no “wife”) deal with the challenge of compromise that is built into a marriage? Who makes dinner? As Viriginia Woolf said, “Marriage [is] the art of choosing the human being with whom to live life successfully.”
Here. Read this essay by Carole DeSanti. She talks about it all here.
So, I wrote this story in about seven hours-appropriate, that number. Seven.
Lately, I’ve been drafting my novel quickly, taking Anne Lamott’s advice to write a shitty first draft. But for this project, I went back to my old way of drafting: write a sentence, revise it, tweak it, move on to the next sentence, repeat. The story is about 1200 words long, and the first draft took me five hours. I ate dinner, and then I revised that draft for another couple of hours. In the morning, I tweaked a bit and sent it off.
And I felt good. Really good.
Perhaps, even in the middle of writing a big thing, it is good to stop for a day or two and get that high that comes when you finish something.
Teaching