I want to thank my friend Gail Werner for recommending that I read Elizabeth Gilbert’s Big Magic, which came to me–as many books do–right when I needed it most. I’ve never read Eat Pray Love. I didn’t watch her TED talk on creativity (where Big Magic got started), even though lots of people were sharing it on Facebook for awhile, singing its praises. Why didn’t I? Why not read her wildly popular book or see what she had to say? Well, because I knew that a lot of writers I admire didn’t like Gilbert much–as a writer, and/or as a cultural phenomenon–and I really, really wanted them to consider me a good, serious, “important” writer. Of course, I wasn’t thinking any of this consciously. I was unconsciously “pandering,” similar to what Claire Vaye Watkins talked about in this provocative essay which came out a few months ago. Every time I think I’ve stopped “pandering,” something comes along to make me realize that I still am. Man, this shit runs deep in me. In all of us, I think. The older I get, the more I realize that the high school lunchroom mentality never leaves us. Even though I didn’t mind not sitting at the cool kids’ table in high school, I still aspired to it–just in a different lunchroom.

The first month of my sabbatical is over, and I’m happy with the progress I’ve made thus far. I have some self-imposed deadlines: finish the current section by the end of January, finish the next section during February, the last section in March, revise in April. I write every day–at least two pages, sometimes five or six. The manuscript is currently at 400+ pages, and at this rate, might get to about 600 pages, but I don’t think it’s going to end up that long. I’ve been writing very scenically, dramatizing much of the novel in something akin to “real time.” This would be fine if the novel’s “clock” was a month, a year, or even a few years. But the novel covers about 20 years. I wanted to “see” the scenes in my imagination and show them on the page, but now that I know what happens, I plan to go back in and do more summarizing, more telling, which is what I really prefer doing anyway.

I’ve been reading a lot of young adult novels over the last few years. Almost all of them take place over a relatively short period of time and are quite “scenic,” unfolding at a rate of, say, one day or maybe one week represented by one chapter. That’s something I’ve been trying to teach myself how to do better–create a “faster read” by slowing way, way down, create a vivid and continuous fictional dream. Novels need scenes. Novel readers need moments when they can just be “in the story.” But frankly, I get a little bored after a while with this approach–both as a reader and a writer. Another book I read recently was the marvelous Fates and Furies by Lauren Groff. This book covers a lot of time, and certainly, there are dramatized scenes, but lots of skillful telling, too. I remember one chapter in particular that needed to cover the first 10+ years of a couple’s marriage. Groff did so by focusing just on the parties they threw in their apartment. The style of party changes over time. The main characters change. Their friends mature. Think about how some of the montages in Groundhog Day work–Bill Murray figuring out how to play piano, how to woo Andi McDowell, etc. The thing I have to figure out, I guess, is how much of what I’ve written needs to be “in scene” and how much needs to be montage.

At the same time that I’m thinking about shortening/tightening the chapters I’ve already written (a process I really look forward to), I’m also trying to draft brand new chapters (a process I dread). I love to edit, but I do not love generating new stuff. Here’s how I’m learning to cope with this: I think of each new chapter like a painting. An oil painting in particular, which is created in layers. First, I sketch. I write about the scenes rather than writing scenes. I free write as things come to me. Then I move things around. Decide on the beats of the chapter. I try not to get bogged down in details like what my characters are wearing or their expressions or what kind of couch they’re sitting on. Sometimes those details come first in my mind, and I build around them, but most of the time, they come last. I use this a lot: xxxx. Reminding myself to come back later and fill in the blank rather than get sidetracked with research–and boy, is it tempting. Every day, I try to add another layer, another level of detail to my painting. Let’s say that my chapter/painting’s not done until I complete 10 layers. Maybe I’m still too much of story writer, and I should move onto the next chapter after I finish step 5, but I like the feeling of accomplishment that comes with getting to about step 7 or 8. I love the feeling of “finishing” a chapter. I usually take a day off  and do something physical, and then I start the next chapter and remind myself (again) not to fuss with the first sentence, the first paragraph, but to just start sketching.

Today, I’m heading to Lake Forest, IL to do a residency at Ragdale. Eighteen days. I’ve never done a residency before. I think I was always afraid that I’d get to one of those places and not be able to write. I also thought that it was kind of silly to go somewhere to write when I live in a relatively quiet house with no kids. I even have a husband who does all the cooking! So why do a residency? But my friends swear by them, and I think it will be good to separate myself from the allure/distractions of my home, my yard, my dog, my cats, my neighborhood, my job, my husband. I’ll let you know next week how it’s going. Here’s a nice video about Ragdale, what it looks like, etc. In the summer of course!

When I was young, I obsessed about craft as a writer and teacher, because I thought craft alone could save me and save my students. I learned (and then taught) the methods of characterization, effective use of dialogue, how to use setting to create mood and atmosphere. Et cetera.
In class, I never, ever talked about the writing process itself.
In “Unconscious Mind,” an excellent essay about craft and creativity that introduces his textbook Narrative Design, Madison Smartt Bell says:

“The great defect of craft-driven programs is that they ignore the writer’s inner process. Creativity, the inner process of imagination, is not discussed. So far as the craft-driven workshop is concerned, creativity is sealed in a black box; you’re supposed to remember that the box is there, but there is a tacit agreement not to open it in public.”

Here’s the problem, as I see it: in order to create an environment in which Big Things can be written and discussed, you have to move away from the straight-up craft-driven workshop. You have to acknowledge and talk about the creative process itself. You just have to. I mean literally: how do you get all that story on the page? It would be like training your body to run a marathon without also training your brain.
What I learned the hard way as a writer was that craft knowledge was not enough. I needed that other kind of creative writing book. The non-craft kind. You know, the self-helpy sort that talks about the boring day-to-day-ness of it, the goofy shit you find yourself doing when inspiration strikes, the obsessive rituals, the dogged regimen and fierce will that are required, all the ways in which you must talk yourself into embarking on (and sticking with!) the protracted journey that is the writing of a Big Thing. 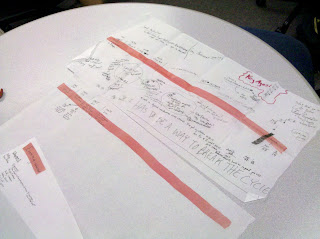 This semester, I’m teaching a section of Advanced Fiction. My students and I are preparing to embark on National Novel Writing Month. At the beginning of the semester, I asked them to read this great article, “How to Write a Great Novel,” and respond to these questions:
What do you notice about the different ways that these writers get their stories out of their heads and ultimately into the books you read. What process and methods and tricks do they use? Do you see any pattern or similarity in how they work?
This is what we came up with.
1. It’s okay to have a plan, a blue print, an outline. (Banks and Ishiguro and Pamuk).
2. Pay attention to your obsessions. Save stuff until it starts to assume some kind of shape. Maybe you don’t just need a writing desk. Maybe you also need a wall (Danticat and Mantel). Maybe you need a card catalogue (Chaon).
3. Don’t work on a word processor, which encourages endless fussing. Consider hand writing on paper, notecards, blue books, napkins, etc.
4. Consider talking out loud and recording yourself (Powers and Baker).
5. If you do write directly into the computer (McCann), manipulate the machine’s capabilities to your advantage (Rice, Baker). And once you get it into the computer, then get it out of the computer so you can move it around (Atwood) or listen to it (Danticat) and see it (Lippman).
6. Remove yourself from distraction. Write on the subway (Wray) or in the bathroom (Diaz) or in your sugar shack (Banks).
7. Embrace the bountiful array of products available at your local Office Supply Store. Get out the scissors and tape (Ondaatje), the colored index cards (Chaon), the binders and flow charts (Ishiguro), the thumbtacks (Danticat). 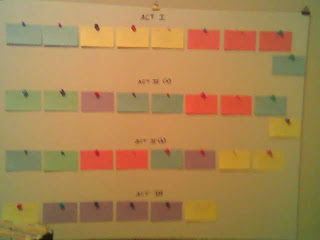 One day not long again, I set aside some class time so that my students could work on their visual aids. The class meets in a room that’s lined with computers and has small tables set up in the middle. Some students went work at the computers, others sat at their tables to draw their outlines. One student was using crayons and colored markers. I sat down at a table to write thumbnail scene sketches on blue and yellow post-it notes.
Someone came into the room, looked around, and asked, “Is this a writing class?” and I looked up and said, “Yes. Yes it is.”